I had very special guests for this dinner, but very little time, because it was to happen on a Friday, which left little time to prepare. Nonetheless, I was able to make the dessert in advance, especially since it requires a settling period.

The first course, not depicted, was a salad whose only claim to fame were the radish roundsthat gave the salad color. I had entertained a fantasy of blueberries and walnuts as additions, but I was simply too poor ( at the moment).

Nonetheless, the salad was good.

Then came the saltimbocca, something I’ve posted before. Still. take a few slices of veal schnitzel (pork won’t do for this recipe) and flatten with a bottle or other soft device and cut into bite-sized pieces.

Use a real Parma ham and place a same-sized piece on the piece of veal. Then find a sage leaf and pin that on the meat with a toothpick. I was given a gift of a sage plant, so that is what I used, but the leaves were tiny, so I chopped some extra to spread over the meat.

The risotto I’ve also described several times, but maybe not in English.

Take a measure of round kernel rice (Arborio or a similar Italian rice), sauté the rice in olive oil. Don’t brown, just sautè until translucent. Deglaze with a glass of white wine. Stir.

Add vegetable broth (or broth from a glass) bit by bit, but never more than covering the top of the rice. Stir all the time. Add broth as needed, almost a quart, all in all.

They always say it takes 20 minutes, like regular rice, With me it takes 25-30 minutes to get a grainy, chewy texture.

Then add almost 2 ounces (50 grams) of Parmesan chesse, grated and the same amount of butter.

The mushrooms should be sauteéd with onions and garlic to soften them. You can also add some bacon or speck.

These are then added to the risotto when it’s done. 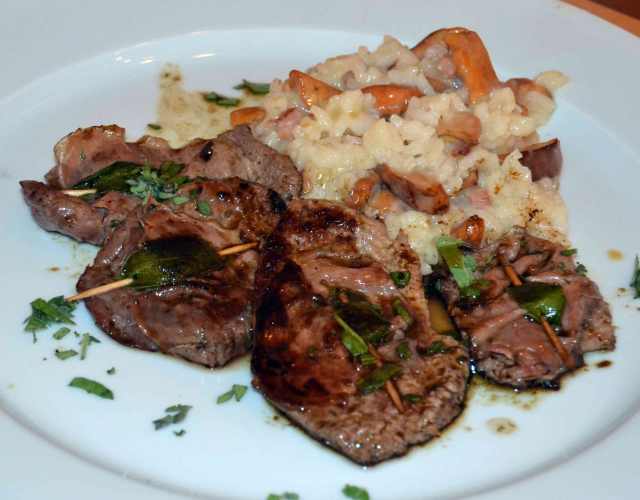 For the desserts I bought industrially-made puff pastry.

I cut the bottoms and the tops and the round windows out of the tops.

The apricots were thrown into boiling water for 20 seconds and skinned and halved.

The rest of the apricots were cooked with an equal amount of brown sugar to make marmelade.

Some of the marmelade gets put on the bottom of the pastry. Then you just add the half apricot and push it into the oven for 20 minutes at 180 Celsius.

steep the gelatin in water to soften it, squeeze dry.

Combine the lime juice and sugar to dissolve the sugar. Cool.

Add the joghurt, whip the cream and combine.

I thought it was good, I think my folks would agree.

This site uses Akismet to reduce spam. Learn how your comment data is processed.